Although we already knew her through the net and by email, we had the opportunity and the pleasure to meet Jackie in person, in France, when she was attending the "Paris-Creation" show.

"I started making bears about 13 years ago. We had just moved from Phoenix, Arizona, to Columbus, Ohio, because of my husband's job. I was a bit lost at the time because I had to give up the school I was attending, and all of my old friends. I have always been an avid seamstress and it seemed natural at this time to go back to creating things with my hands. At first I made all kinds of things to sell at craft shows, and I stumbled upon bears by accident.

They were one of my sewing projects, but it was immediately apparent that the bears were different. They talked back ! Soon I discovered the whole collectible Teddy Bear world, and that there were many others who made bears. It was great for me because not only could I do something I love to do, I was able to make friends in the bear world that I wouldn't have to give up if my husband's job made us move again! "

Since there is no "Bear School",
would you please tell us more about your background ?

" I have been sewing since I was a very small child. My first sewing project was a little "cookie cutter" type Teddy Bear when I was 4 years old. I cut it out, embroidered the face myself, sewed it together by hand, and stuffed it with old nylon stockings. I was very proud of this first bear and kept it for many years. Unfortunately it got lost in one of my many moves.

I was the kind of child that thought she could make anything, and usually did just that! Mostly it was sewing projects, but I also knit and embroidered from the time I was a small child. Cake decorating was also one of my early hobbies. By the time I was in high school I was making all of my own cloths except for my school uniforms. I loved it and would attempt anything, even jackets and winter coats. Later I took a pattern drafting class and learned to make my own original designs. I use the skills I learned in that class and my sewing experience when I design and make my bears. Another important skill I have is my mathematical ability. 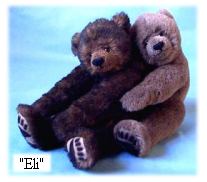 At one time I was studying to be a math teacher. Pattern making is basically geometry...something I am very good at! I made my first few bears from a pattern, but when I started making my own patterns, the bears looked much better and more like "me". I have never taken a bear making class officially. I got all the specific information on making bears from the early pattern I used, from books, and from hints given to me by my many artist friends. I have evolved my own style and techniques from putting together information from these many sources, and by experimenting and practicing for 13 years! I will never be finished learning. Recently I did take a pattern making class from Robin Foley. She uses a different method to design animals which involves sculpting and making the pattern over the sculpted model. I will incorporate these skills that she taught me with my own methods. They will be added to the evolution of my personal style. "

" Sometimes I get an idea and just have to make it right away. Other times I keep it in my mind for months, even years, and really work on it. My new "floppy bears" were like that. I had seen a photo of a real bear lying on a log, in a very relaxed pose, a couple of years ago. I just knew I had to make that bear, but I put it off. What I needed was a way for him to look relaxed. Up until the time I made these floppy bears, most of my bears were stuffed very hard and were posed much like a statue. Last spring I was making a special auction piece for the Clarion auction. I did a scene from a book where one character was holding another that was unconscious. To get that feeling, I used double cotter pin joints and stuffed with pellets to make this bear "flop". This worked really well! Then I started thinking about the bear on a log again, and made the connection that the double cotter pin joints and pellet stuffing would work well for him too. The result was "Burle" my first floppy bear, and one of my most successful designs. " 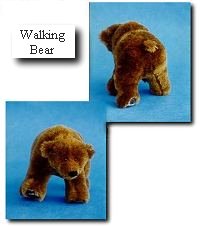 When you design a new bear, are you more "driven" by the shape or by the materials, textures ?

"I look at photos of real bears for my designs, and study the poses carefully. The shape of the patterns are my first consideration, then I try to find fabrics that will make them look natural. Often I will use different fabrics with the same pattern for slightly different effects. "

Although "Blizzard" bear is jointed , your last patterns are hardly jointed and more and more realistic. Do you intend to focus in this direction ? 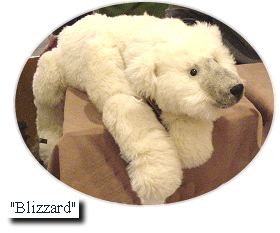 " I really like "Blizzard" and my other floppy bears very much, but both styles have their place. I will continue to do both. The unjointed bears are more of a challenge to design, and I need the challenge. Both styles emphasize body language which is what my bears are all about. I like bears that seem alive and in motion. Both styles accomplish this, but in different ways. "

By watching at "Mania" and "Meloncholy" bears on your website, we may see that you are involved in communicating on treatment of mental desease ? 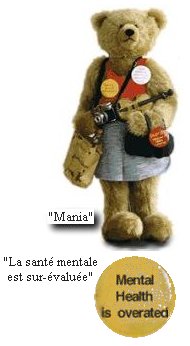 " O yes. I have struggled with bipolar disorder myself and also have a son with this disorder. One of the most difficult parts of this illness and other mental illnesses is the lack of accurate information about them and the stigma that misinformation causes. Mental illnesses are for the most part biological in nature and therefore very treatable. If I can be of help, through my bears, in informing people about this, I will feel that I have accomplished something very important in life ! " 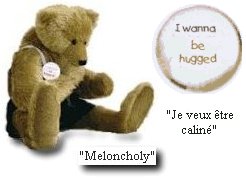 Do you intend to make other animals than bears ? 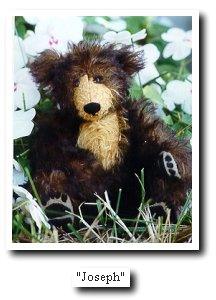 " I have already made a few other animals and I do intend to make more. right now I have a buffalo that I made in Robin's class. I also made a one-of-a-kind moose once, and several cows. Bears are special though, because they have such a human look to them. "

Did you enjoy participating at french exhibition and will we have the pleasure to see you again ? 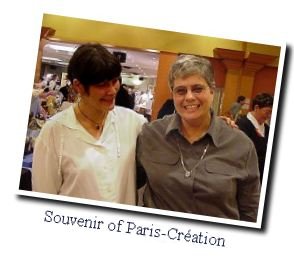 " Yes, I did very much enjoy the French exhibition, and I hope to see you again next fall. It is a beginning collector's market, but a very appreciative one. I also very much enjoyed visiting Paris and I would like to get out into the French countryside to see more. "