"Oursement Vôtre" brings you an exclusive interview of american artist : Kelly Dean, creator of "Mole Island Bear" and "Bear Noel". Prepare yourself to be surprised by the originality and the beauty of his creations !

"I began making bears back in 1997. Olivier had come to my house and saw my work : carved geese, furniture, and a Pere Noel I had made. He urged me to quit my job and join Moel Eyris Studio at Henwoodie and move in so I could do my art fulltime. And, I did." 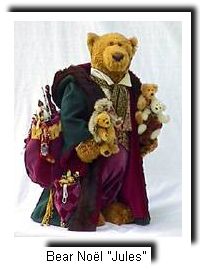 Since there is no "Bear School",
would you please tell us more about your background ?

"I have designed and made things most of my life. I worked quite a bit in wood and like designing and making Arts and Crafts style furniture. As an artist/craftsman I am attracted to colours and textures, especially in fabrics. When I began making my Pere Noels, I worked in reverse--I made the bodies and clothes and saved the head till last. I discovered that the bodies were too large for heads and I was in a dilemma as to what to do.

I have a large teddy bear collection and thought I would just chop off one of their heads and attach it to the Pere Noel body, but I couldn't bring myself to decapitate one of my teddy bears. So, I made my first bear head and it fit the body perfectly, but I didn't know what to call it. And, then it came to me, Pere Noel - Bear Noel ! (in English 'Bear' rhymes with 'Pere') That's how I began making my large and elaborately dressed Bear Noels (which were featured in an article in the December 1998 issue of TEDDY BEAR AND FRIENDS magazine [U.S.])." 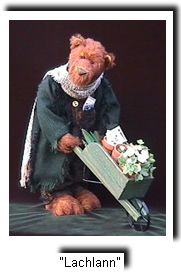 "When I first began designing and making bears I preferred making the really large Bear Noels---24"-34" and weighing up to 35 lbs! I had also started making more traditional undressed teddys---Butch Bears (17.5") and Northwoods Bears (19"-21"). But, by the fall of 1998 I was designing and making the first Mole Island Bears (17"-19"). Even though Mole Island Bears and Butch Bears are the same height, they are quite different --- Mole Island Bears are much more slender and not as robust as my earlier bears. I would say my favorite size to work at now is 15"-18". "

Where does the spirit of Mole Island Bears come from ? 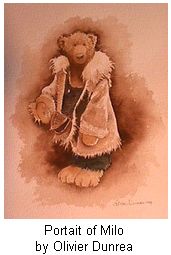 "The Mole Island Bears are very much influenced by Olivier Dunrea's (my partner) mythology called 'The Lay of Moel Eyris" (The Story of Mole Island). His mythical world is very medieval in feel and atmosphere and has had the greatest influence in my design of the Mole Island Bears. In keeping with the tone of his writing, I wanted the bears to have 'real lives and histories'. At our website there is a brief description/biography for each bear."

Can you tell us more about 'reversed sewn seams' (without giving away your secret, of course ;-) ?

"When I started designing clothes for my bears I didn't like the look of the smooth seams against the soft fur of the bear. It looked too 'hard-edged'. I accidentally sewed one of the coats inside out (the seam on the 'right' side of the fabric). It looked interesting and was unravelling a bit so I just unravelled it more to give a really 'frayed' look to the seam.

The next garment had a larger seam allowance, reversed, so that I could make an even more pronounced frayed seam. And, that's pretty much how the 'reversed sewn seams' came about. Different weaves give different effects to the reversed seams. And, they have now become my distinctive look to my bears' clothing. " 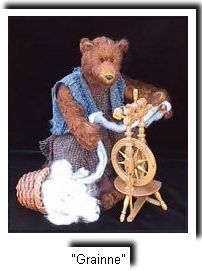 "New bears are almost 'instaneous' in the sense that a certain fabric, or piece of mohair, or an interesting accessory will give me the idea for a bear. Most recently, I had bought a miniature working spinning wheel on eBay, and wanted to make a bear sitting and actually spinning. I had to create an entirely new pattern with articulated (bent) legs. In addition, I have begun doing an elaborate internal armature for the bears' arms, paws, and fingers. I want the bears to be able to hold or grasp objects (not just glue objects or sew them to the paw). I also found some terrific antique ivory crochet hooks and awls and so I made a crocheting sitting bear; then a knitting sitting bear, etc. These new bears are now posted at our website." 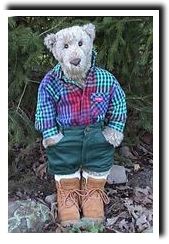 "Matthew" bear obviously carries a message. How important is this in your work ?

"The "Matthew" bear was designed and made to reflect the personality and youth of Matthew Shepard, the young man whom he commemorates. I wanted the bear to have a more innocent, vulnerable look. Matt loved the outdoors, hiking especially, so I chose clothing that would reflect that interest.

If the "Matthew" bear carries a message it would be the sadness and loss of a young life as a result of a horrible hate crime. Inside the bear I placed personal messages and tokens from Olivier and myself. Just something from us to Matt."

Note : 160 Bear Artists and Collectors from all over the world are making and donating bears to the HIKE AGAINST HATE '99. Each bear has been lovingly made and named in memory of victims of hate crimes. More about this on The Matthew Shepard Page. 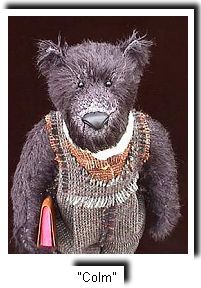 "Yes, I do. In fact, last year I signed my first commercial contract to design and make an entire range of animals other than bears. There is only one bear in the entire group. Some of the new Mole Island Bear designs I am working on will have the bears paired with 'companions'---penguins, sheep, goats, chickens, geese, etc. Angus Ian and Joop were my first pair."

And finally, a few words for french speaking peoples ;-) ?

"I have never been to Europe and my goal is to visit France, Belgium, The Netherlands, and Germany in 2000. My work is influenced quite a bit by European sensibilities--architecture, fashion, history, and art. I'd love to visit Mount St Michel and small French villages. I may even give a few of the Mole Island Bears French names---I love the French language (Olivier speaks it fairly fluently) and French food and want to do a series of Mole Island Bears 'French' country folk!"